You may remember a few months ago I did a bit of a pisstake of some old ads from out of ancient computer magazines, concluding with this memorable “OH HOLY FUCK, LOOK AT THOSE KNOBBLY GREEN TRIANGLES!” one for the Apple ][. 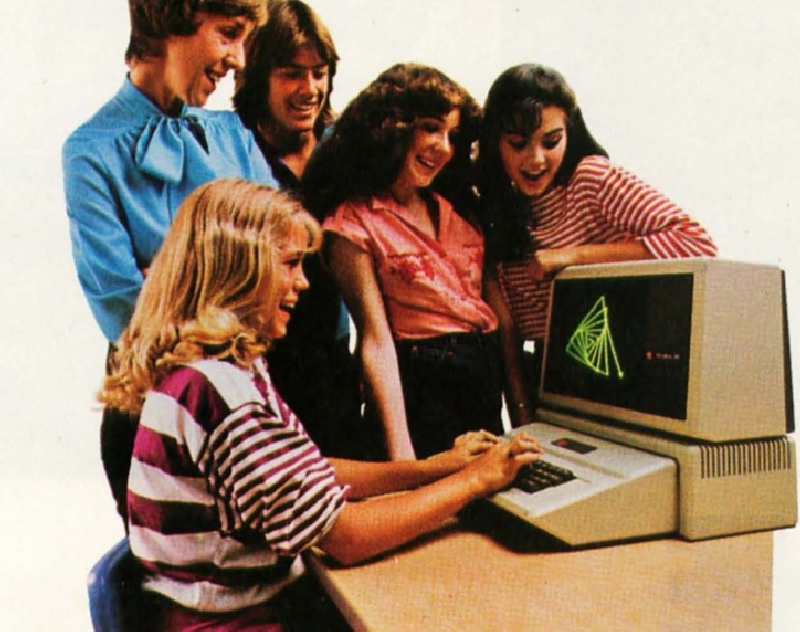 Computer mags were rife with ads done in that particular style back in the late 70s/early 80s. I guess it was just part of the Universal Lie that was prevalent around home computers and game systems back then: that these things were Educational, would Help With Your Homework, would Bring The Whole Family Together in Joy and Harmony, and not just for little Johnny to shut himself in his room playing Beach Head and Impossible Mission in the hours in between masturbation sessions. Kids told their parents that, and the ads were happily complicit in the lie, representing some kind of nonexistent happy family Utopia in many a ridiculous ad. 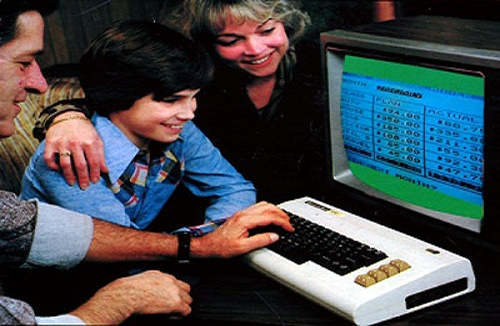 Mom is gazing adoringly at the Vic, grinning along with Son, who isn’t doing anything at all apart from gurn at the fingers of Dad’s left hand. He’s also smiling too, in a strange, distant kind of way, and definitely not the expression you would expect of anyone who is actually using a spreadsheet. A spreadsheet on a Vic-20, with absolutely massive characters, which you are doubtless supposed to use with a tape drive. And come on, who *actually* balanced their family accounts in giant characters on a Vic-20 with a tape drive? Nobody at all, not one single bugger. It was just part of the universally-condoned Lie about how your new home computer would be properly useful *and* bring the family together round it, everyone grinning in endless Utopian bliss. 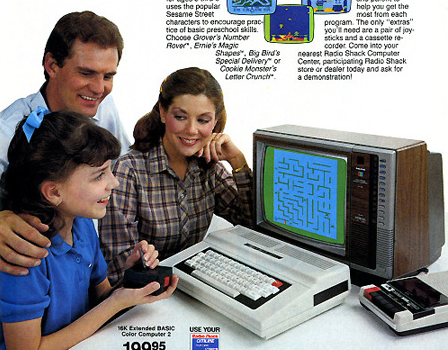 Over in the Tandy catalogue at least Awfully Nice Blue Ribbon Girl is allowed to actually play an honest to God game instead of do a bit of family accountancy, even if it does look like a bit of a boring maze game. She seems to be smiling way more than the dreadful palette (what was it with the CoCo/Dragon and that nasty bile green?) and dreadful graphics warrant. Perhaps it’s due to the reassuring hand of Dad, resting on her shoulder while he gazes at the top of her head grinning slackly. And look at Mom. She’s not seeing her little girl playing some crap maze game. She’s in the thrall of the Lie and she’s seeing her daughter Learning Computer Skills and is already mentally at the daughter’s graduation ceremony from MIT. 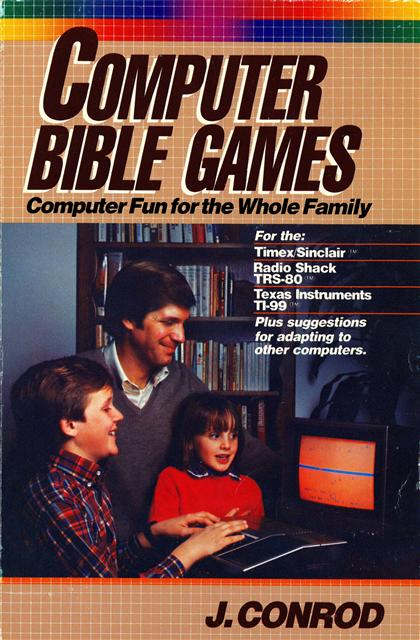 Over in the Bible Belt Dad’s looking well smug since he’s not only providing a Computer Education, he’s also on his way to Heaven for sure. Son also looks completely artificially happy given that he’s sat in front of a bloody TI 99/4A instead of the Commodore that all his mates have got, *and* he’s expected to play bloody Jesus games. The little girl knows the score though. Her mouth may be smiling but her eyes are clearly yelling “oh for fuck’s sake”. 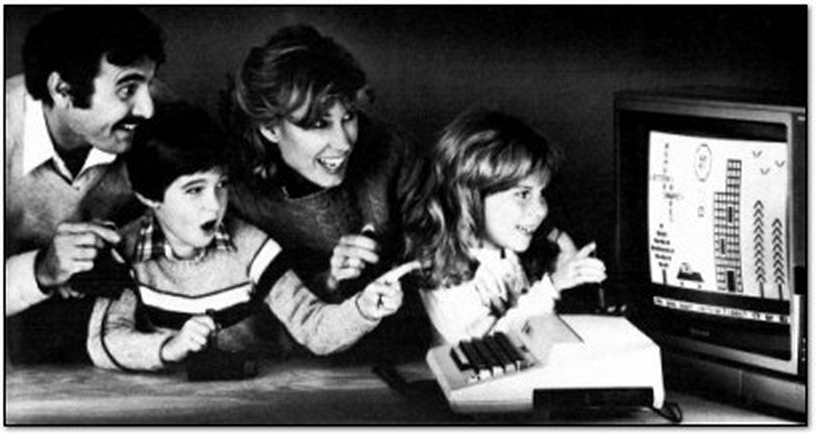 This kind of thing has been going on since well back in the black and white age, as this old Atari 800 ad demonstrates. Big nose 70s moustache Dad has done something so amazing (just by holding the joystick by its very tip in one hand) that his entire family are in abject awe. Son is slack jawed, pointing wordlessly at the screen. Mum looks like she’s just done a fat line of coke and it’s just now starting to kick in. Daughter has had all thoughts of My Little Pony princess castle play sets expunged from her mind by the sheer awesomeness of what looks like a complete dog’s breakfast of an effort on the Sony. The home computer in this case seems to be being presented less as an educational tool and more like some kind of shared ecstatic visionary experience. 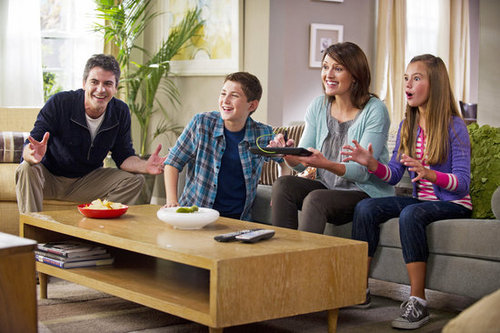 Even in modern times the same kind of thing persists. Just look at this ad for some kind of Wii sketchpad peripheral. Mum’s beaming while she wields the stylus. Son is clearly ecstatic to see what his mum’s drawn. Whatever can it be? Judging by Dad’s expression and the way he’s holding his hands out like that, perhaps the game is to guess what Mum is drawing and he’s about to ask “is it a horse’s arse”? 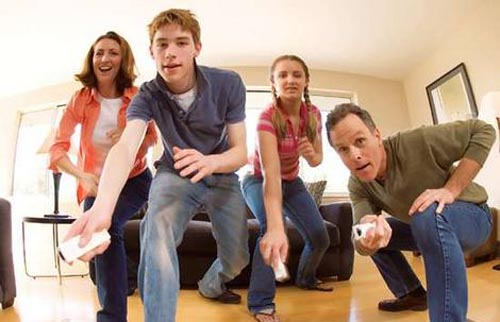 Of course it’s rife in Wii ads. This one shows the happy family from the point of view of the telly itself. Whatever they are playing it seems to encompass a fair range of simultaneous activities for the family members to enjoy. Looks like Mum’s jogging, Son is getting ready to fry an egg, Daughter is disco dancing, and Dad has lost something in some dark recess and is looking for it with a torch and a worried expression. 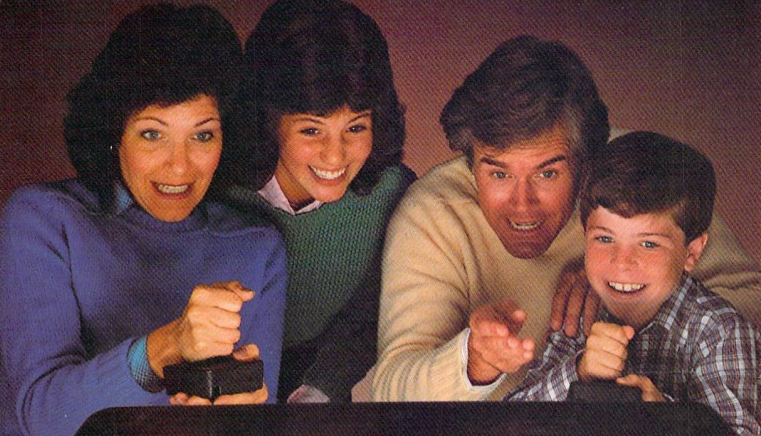 Back at the start of the 80s cocaine use was particularly rampant, as evidenced by this buzzing Atari family. The three adult members are plainly off their tits. Mom is clenching like crazy. Older Daughter has a grin that reminds me of Aphex Twin, and Dad is on the verge of drooling while his eyebrows attempt to crawl off his face. All he can do is gesture limply with his right hand, presumably to the mirror just out of shot on top of the TV, indicating that someone should get busy and chop out some more lines with the platinum American Express card.

Son is clearly going to grow up to be a Bucky the Beaver furry. 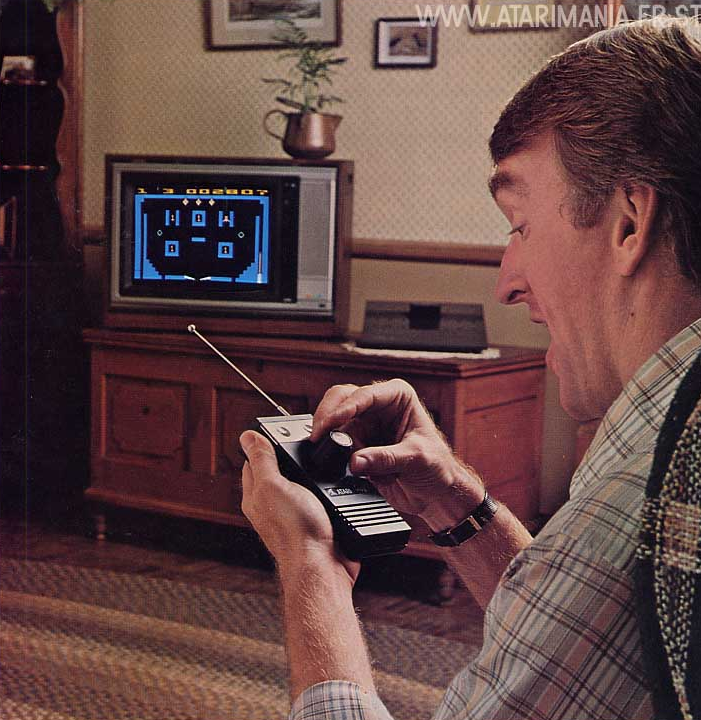 Without everyone else round him gawping and grinning, poor old Dad is left wondering why he can’t find the footy results on this weird new radio thing he’s holding. Now he’s not smiling – his mouth is open as he yells “FUCKING THING!” at it in frustration. 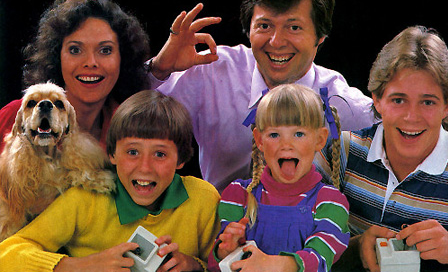 Here the McPervert family are shown reacting upon the occasion of their first exposure to Goatse. 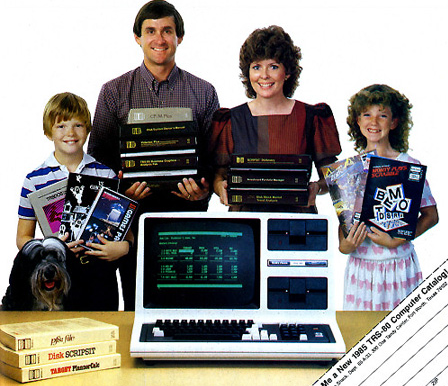 Oh come off it Tandy, that is not a Family Computer by any stretch, no matter how you try to spin it. Green screen and another fucking spreadsheet, nary a joystick in sight, parents with huge piles of Serious Software and kids with armfuls of Wholesome Educational Stuff. This is taking “we bought it to help with the homework” way too far in the direction of truth. 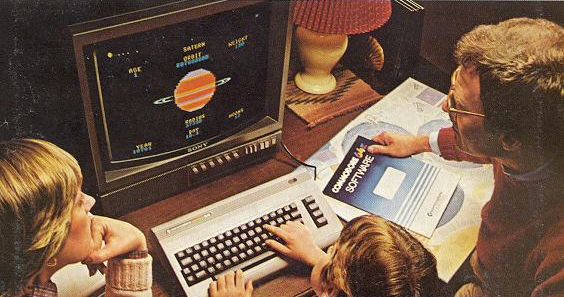 Better – that is at least the right machine, as it’s a Commodore 64. The kids are chuffed and earnestly thank you for it Dad, but they are plainly waiting for you to sod off to bed with your earnest face and your earnest educational software. Yes, the diameter of Saturn is all well and good, but there’s Bruce Lee to be played once you’re out of the picture.

also what the hell kind of Commodore 64 is that that only needs one cable? 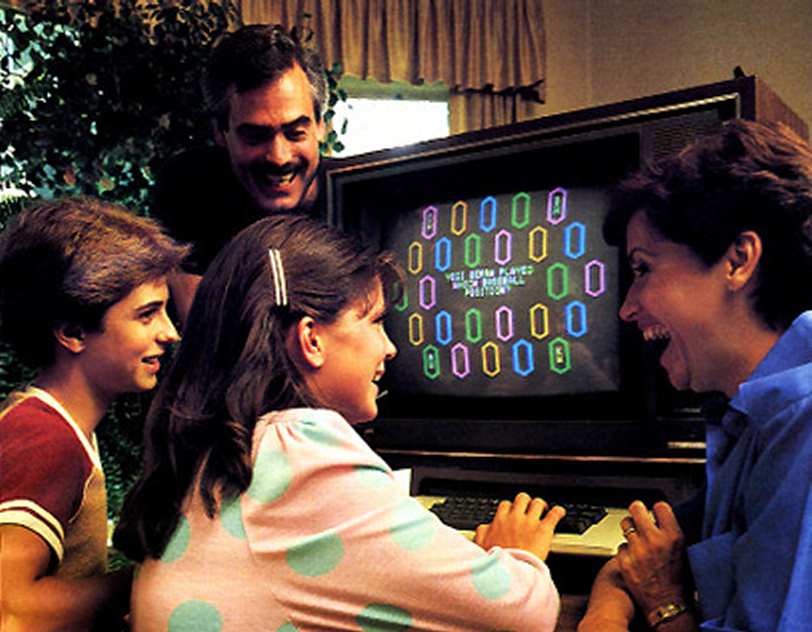 What you can’t see is that the dog is in this family grouping too. He’s just stuck his nose right up Mom’s skirt, and boy is his nose cold. 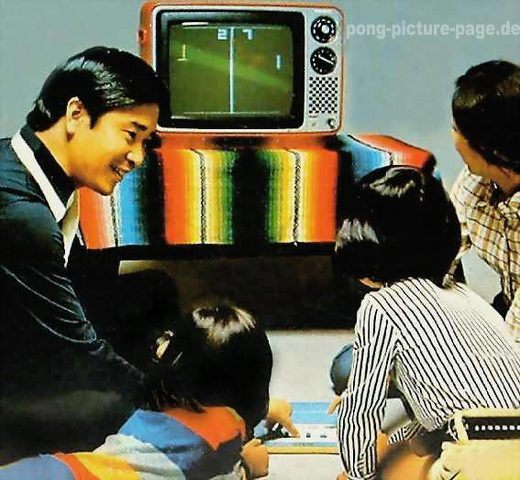 A few years earlier over in Taiwan families gathered together to learn the art of “pong-fu” – the ability to play Pong without using any kind of paddle controller at all. Just the merest touch of the little finger sufficed for the true masters.

At that time in history raster bars existed only in textile form. Here the family TV sits atop a really early Fairlight demo on the dyed wool platform. 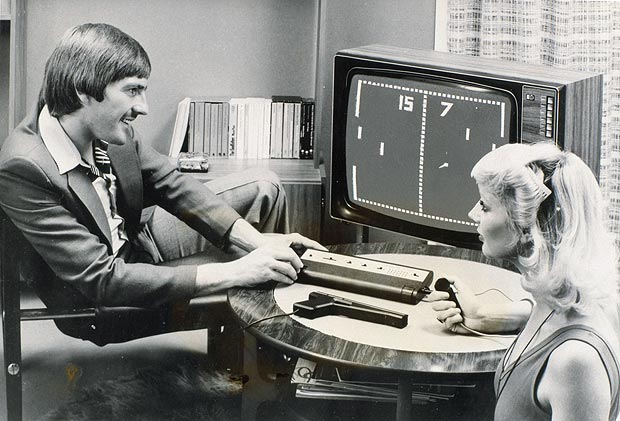 It was a man’s life in the insurance business in the swinging 70s, as evidenced by this little scene. Mr. Swinging Business Dude is having a right old fine time with his slightly-too-long hair and approximate moustache, grinning like a monkey as he enjoys a rousing game of Pong in his office. Curiously enough his opponent (presumably his secretary) looks like she is still taking dictation; her hand isn’t even on the console, as his is. Perhaps that thing in her hand is a remote paddle and not a microphone. 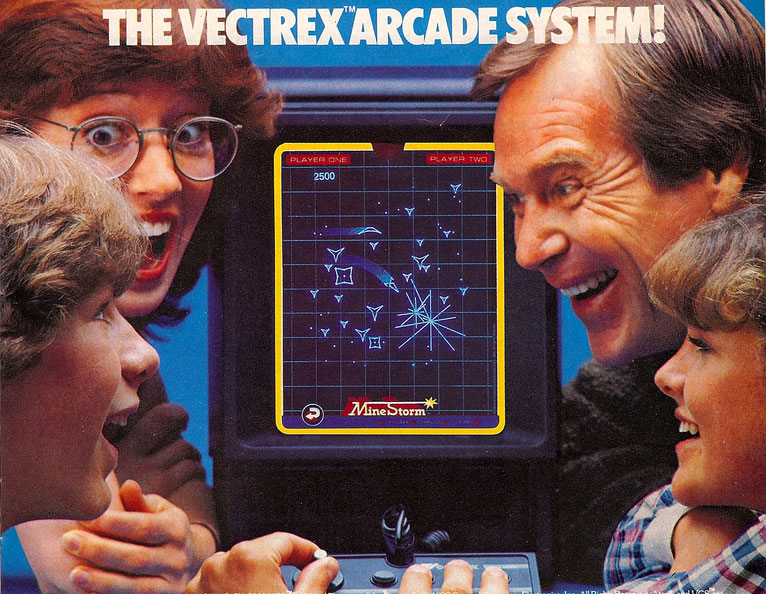 This is clearly, as they say, one for Up The Arse Corner. 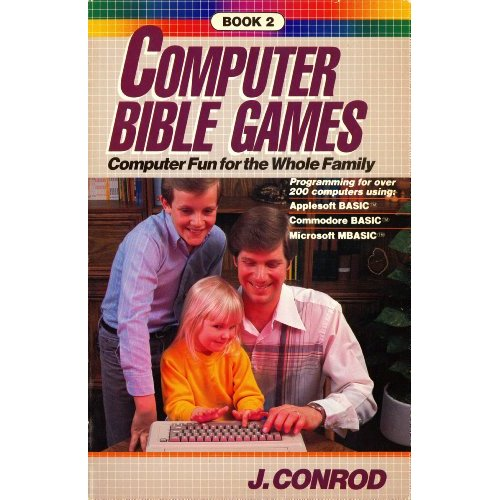 Back in the Bible Belt, another Dad who figures he’s on his way to heaven. Little does he realise that Son is going to grow up and become Mr. Goatse. And that look in the girl’s eye isn’t glee. It’s psychosis.

Next door things are also a bit worrying. Dad is toothless and sports the moustache and belt buckle of a true pervert. Older Daughter is concealing a knife in that marsupial pouch thing of her Atari sweatshirt. And they’ve invited their friend Joe over to play and he seems to have forgotten half his t-shirt. Little Johnny’s getting ready to lay his head on that sweet exposed manflesh.

You just know that the joysticks are about to come out. 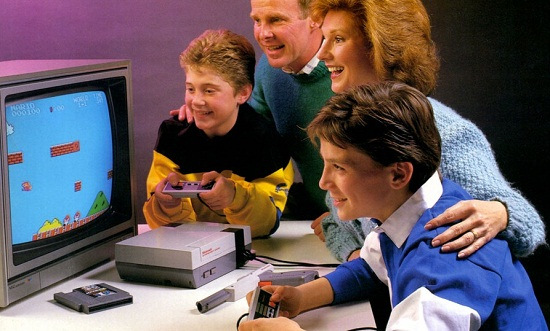 Ahh, Super Mario Brothers, the multiplayer game for all the family! Except that it’s single-player. And whoever’s playing is just jumping Mario down a hole in the ground. I don’t think any of them are actually seeing what’s going on, it’s just a big plurry glow for them by now. 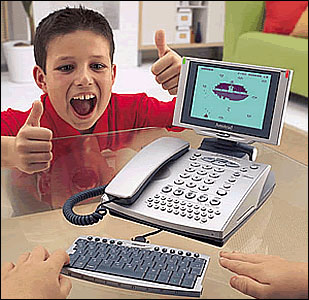 This kid isn’t ecstatic. Those raised thumbs were coerced somehow, perhaps by threatening his dog’s life or something. He’s actually screaming in agony and RAGE at the very idea that anybody would expect him to show any other kind of emotion at the prospect of playing crappy 30 year old Spectrum games in blurry black and white on some piece of Amstrad absolute shite. 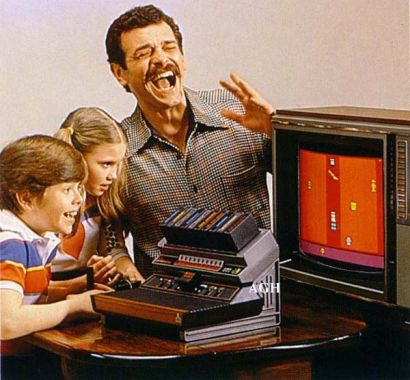 Well that’s it for this time. More old ads, and rubbish game videos, and of course shiny new games from me next year! Nadolig Llawen!

This entry was posted in Historical. Bookmark the permalink.