Look you may think my games are pretty weird.

But let me tell you they have got nothing… NOTHING… on some of the stranger stuff that’s out there.  As it’s Sunday and to give you all a chance to rest your Minotaur-strained thumbs, let’s have a little look at one of the weirder and least well explored areas of gaming – Christian gaming.

There are certain kind of Christians out there who believe that it’d be harmful to let little Johnny play normal secular video games.  And there are software houses that specialise in making special Godly games for those kind of Christian families.  Now I’m not knocking anybody’s religion here, since what I’m talking about has nothing to do with Christianity itself.  It’s just that in such a niche market there isn’t a great deal of competition or choice, and it seems that the kind of games produced can be at worst a bit rubbish in quality.

However at best they can be deeply, gloriously, utterly strange.  I don’t know why, whether it’s something in the Communion wafers at certain churches, but there are many instances of Christian games that are just… odder than just about anything you’ll find elsewhere in gaming.

In Zoo Race, you are a librarian who gets turned into a horse.  In order to run a race against other animals who include a cat wearing a pirate hat and a pig wearing a top hat.  The race is narrated by God Himself.  The game also features a special Animal Disco where the animals all dance along with DJ Noah while  a lightshow emerges from the Ark of the Covenant. 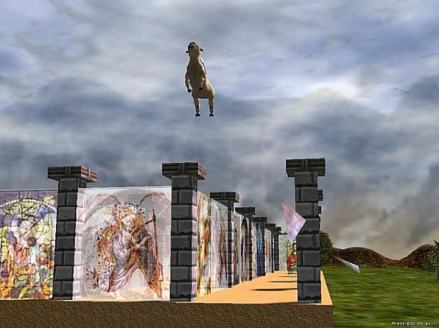 Look at that sheep fly.

A flying sheep emerges from the Maze of Smashable Religious Windows. 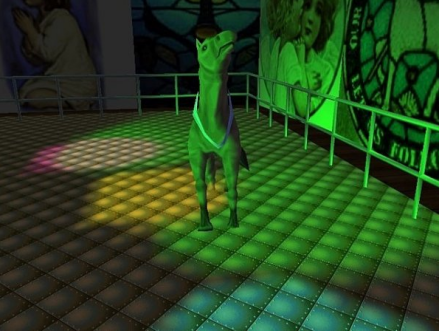 Hannah the librarian-turned-horse clops her stuff in the disco in Noah’s Ark.  I bet you never knew Noah’s Ark had a disco.  With mirror balls and everything. 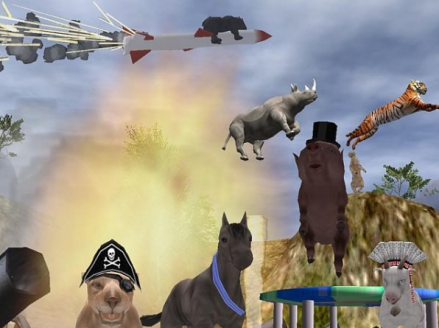 This is your brain on GOD.

In this typical everyday racing scene a pig in a top hat bounces off a trampoline whilst watched by a goat in a milkman’s cap, a librarian turned into a horse tries to outrun a cat with a pirate hat while a rhino and a tiger are shot out of a cannon, narrowly missing a bear strapped to a missile while a sheep watches all from afar, dancing.  YES. 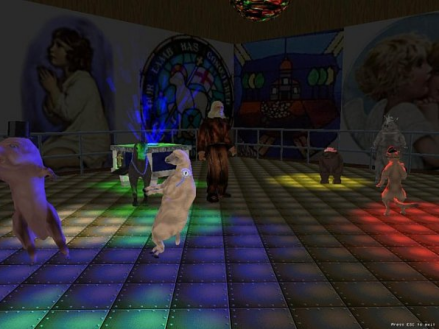 Disco on the Ark

And here’s Noah strutting his funky stuff with the gyrating beasts of the field.  This is an entire game mode all to itself, an Animal Disco with the lightshow coming out of the Ark of the Covenant.  You can touch each beast to make them gyrate and touch Noah to make him say some funky scripture.

Here’s a sample from the game’s website itself, where they tell the story of each animal.

“One day Hannah the Horse was racing on lots of green grass. Suddenly she noticed that lots of crows had come out.  “Look Cain!”, she declared, “The crows have come out to greet us.”, but just then she noticed that the crows were indeed flying overhead, but they also were pooping lots of poop from above.  As the noise and stench came from above, she shouted aloud, “Quick everyone!” “Let’s run into this cave over here!”.

Then Hannah noticed that the cave ending was a cliff that dropped down to a deep river far below.  Agggh!, she screamed as she fell down. “Oh those nasty crows”, she said aloud.  “If I could just be on the moon, then there would be no more crows, because crows don’t live on the moon!”

There’s a demo version you can download for free and I highly recommend that you do even if you’re not even faintly religious and even though the game itself is twitchy, clunky, ugly and crude.  It’s worth it just for the sheer “what the absolute smeggity smeg?” of it.  There isn’t a WTF big enough.  It’ll be worth it when you win your first race and see Noah scuttling enthusiastically to the Victory Disco (which is a separate disco than the one on the Ark itself).

See? A few minotaurs here and there is PERFECTLY NORMAL compared to this stuff.

Oh, there’s more out there, like the one where you get to carry a giant pile of oxen on your head, or the one which takes place on a Noah’s Ark almost entirely full of kung fu goats.  But maybe I’ll talk about one of those another Sunday.

Until then – I’ll see you in the Animal Disco!

This entry was posted in Gaming Oddities. Bookmark the permalink.